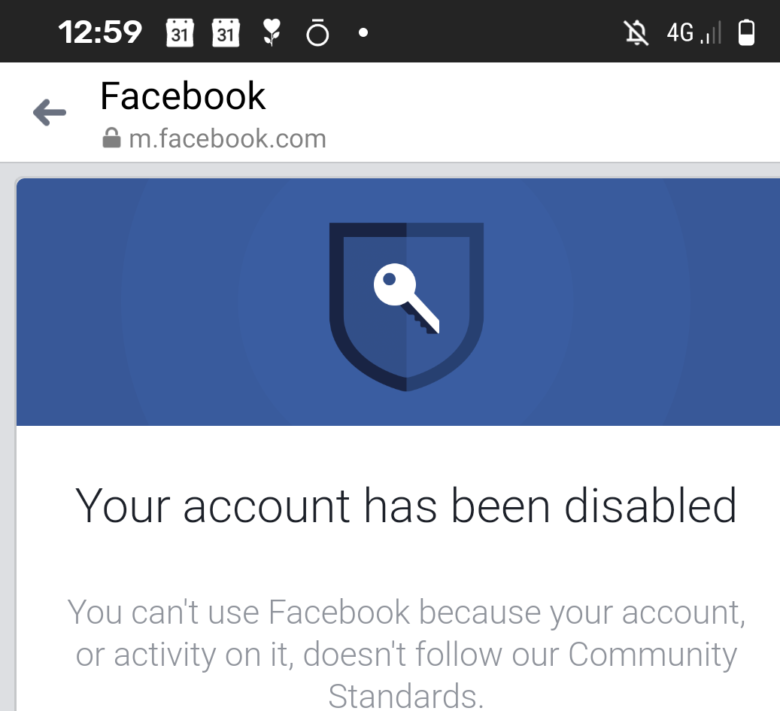 Facebook had recently disabled my account for ‘violating their community standards’ even though I barely posted on the social network and mainly used it for running the Impro Cairns and Weekly Doco Mondays community groups, staying on top of local events and using messenger as a second email account (well, fifth email account to be precise!). This sudden action destroyed said community groups, disconnected me from almost all of my international friends and about half of my local friends with whom we had not yet exchanged numbers. Furthermore it alienated me from local events since many people didn’t know and forgot to invite me offline. It’s incredible to see that even though I had largely disconnected from the platform how much of a grip it still retained on my social life. But first, let’s start from the start.

My relationship with Facebook has been a rocky one. She initially drew me in back in 2007 with the promise of being invited to American college house parties back when I lived in Isla Vista in Southern California, living out my American Pie fantasy (with surprising accuracy!). Back then it was the only way to connect with student groups and was the hub of socialising and information sharing on and off campus college life (back then it was for university students only). Back in those early days the algorithm did little to analyse your behaviour and shape your feed accordingly to draw you in and make you forget that you were sitting on the toilet for the past two and a half hours, completely oblivious that you missed your doctors appointment for constipation.

Facebook the alluring temptress completely swallowed me whole towards my mid 20s. I found myself checking into every location not unlike a FourSquare junkie, taking photos and immediately posting them of me next to anything from the Great Pyramids of Giza to the George Costanza in the nude street art in central Fitzroy and everything in between. I was completely and utterly hooked on the approval of others like a crack junkie to …. well crack! I was not prepared to fellate a person for my next hit although I surely was not far off, finding myself more out of the moment thinking of how impressive the thing I was doing would appear to my so-called 1092 Facebook friends, many of which were based on a single drunken meeting at some backpackers hostel somewhere in the world. Who is Ronald Chan? It doesn’t matter – he commented on my my photo of me diving off the pontoon in Nice with “Wow, that’s stunning – I wish I was there” so I like him back.

You know those people recording the entire concert on their smartphone only to post said choppy distorted recording on Facebook and never watch it again? Well, that was me – I really should have taken the advise from Killswitch Engage at the Vancouver Vans Warped Tour to grab a pen out of my pocket and stab the person doing just that in the eye – I would have become a pirate but at least a present one!

It took being completely and utterly disconnected from civilisation volunteering in the Peruvian Amazon rainforest for over a month for me to find the time and space to reflect on how my addictive relationship with Facebook was affecting my experience of life on a moment by moment basis. I found myself staring into the piranha-filled waters realising that I had so completely filled my attention with social media and thinking about social media that I could not recall the last time I had enjoyed such moments to myself outside of meditation classes in hipster Melbourne cafes. That was when I made the decision to not just cut back on social media as I suspected this would not do the trick, but to actually delete my account. I wanted to reclaim my life back in the form of my undivided attention on whatever it is that I am doing at the time (something I am still working on to this day). The moment I arrived back in Cusco and reconnected to the matrix, I backed up my photos, posted my phone number to the people I wanted to stay in touch with and deleted my account, forever.

The following year was bliss although not without some withdrawal symptoms. It took me a while to be able to go somewhere and stop thinking about who I should let it be known to that I was at said place or event. It took me a while to start simply taking photos for myself. It took me a while to learn to really tune into what others were saying without sharing with them something vaguely relevant I had seen on Facebook. Once I got there though I well and truly started enjoying being present in the moment and being fully with the person I was with at any one time. However I found my social calendar had started drying up no matter how much I tried to remind my friends that I did not receive their invite to their 30th which they allegedly sent to all of their ‘friends’. It seemed that in order for a friendship to be official it had to exist on the interwebs.

Therefore I started a new account with the clear intention of only using it for events and messenger, never to get swallowed up into the vagaries of the ‘feed’ – a feeding trough for our attention since I knew the dangers of the territory well. I had largely stuck to this intention over the years of my early 30s, only delving into the feed once a year or so just to remind myself of how vacuous the content was, much like I occasionally take a sip of Coca Cola to remind myself of how disgustingly sweet it really is to one not accustomed to it’s flavour.

Since making the best move of my life to Cairns I started engaging with the community more and more through Facebook by attending almost every event I was invited to (think The Yes Man) and posting many events of my own to the community. I also migrated my passion for improvisational theatre aka theatresports up to the tropics by creating Impro Cairns, running weekly workshops in 2019 and opening our lovely sharehouse in Machans Beach up to documentary lovers in the form of a weekly documentary night. Both these community groups were growing in popularity amidst the fear around social distancing of COVID times until one day it all came to an end. Facebook posted the below notice when I tried logging in.

I immediately appealed the decision however it has now been a month and still nothing. I found out from my friends that both commnity groups had been taken down too thus undoing months of work building them up at the whim of an algorithm. I was not given any exhalation as to why this had happened nor any prior warming. I had hared of people’s accounts being taken down during COVID times as the tech giants increase their censorship of any views of the pandemic outside of the WHO orthodoxy (something that is very new to the scientific method – something straight out of Orwell’s 1984). I went through my posts and could only think of a few recent ones where I had posted some London Real episodes proposing an alternative narrative of the pandemic although I have friends who post this kind of stuff hourly to no consequence. I did also post my birthday party which was within Queensland state government guidelines however the following offending text may have had something to do with it.

“In order to reduce the spread of germs to increase personal safety during COVID times all patrons will be required to drink a shot of pure alcohol. Social distancing will be cured with hugs and anyone caught elbow bumping will be asked to leave the premises.”

Either way I don’t believe I did anything extreme enough to warrant disabling of my account but I did learn one big lesson from this experience. Never again will I place my social life and the fate of community groups I create in the hands of a centralised tech giant who can take it all away with a single keystroke. It is time to move away from centralised social networks and start exploring decentralised platforms where we fundamentally maintain personal sovereignty irrespective of what we post, networks such as Minds, Diaspora, Mastadon and Signal. It is time to reclaim our freedom of speech as it is very quickly and silenty being eroded right under our noses. Let’s start a discussion which results in action.

I’d love to hear your thoughts – has anyone tried these decentralised social media platforms such as the ones I mentioned above? What did you think? Please comment below.